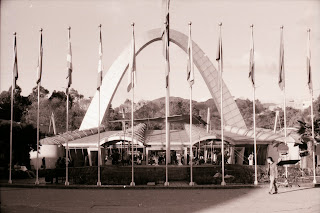 The 24th Feria International del Libro de Bogotá is now in full swing. The first two days are reserved for professionals—editors, distributors, and, for the past three years, librarians. This post records a view of the first day of the Fair.

Bogotá offers the standard suite of events—book signings, author talks, workshops—along with the publishers’ exhibits. This year’s meeting added a new twist. The inaugural session provided a platform for what may be the early stage of rapprochement between Colombia and Ecuador, whose relations have been strained since Colombia’s cross-border raid into FARC installations just inside the Ecuadorian border three years ago. Perhaps historians will see the inaugural session of the Feria as bibliographic diplomacy, in a nod to the ping pong diplomacy which launched a change in US-Chinese relations in the 1970s.

Presidents (each referred to the other as “excelentisimo presidente”) Rafael Correa of Ecuador and Juan Manuel Santos of Colombia offered remarks appropriate for the stage they shared. Correa spoke first, following a glossy, up-beat video production, “Ecuador Está Viva.” His remarks stressed the shared history of what was once one republic, at one point encouraging Colombians to think of his country as their “sur” and Ecuadorians to consider Colombia their “norte.” The loudest applause followed his remarks on economic development that emphasizes ecological preservation.

If Correa stressed convergence, Santos spoke much more to culture. He used the podium to stress to this largely Colombian audience that his administration had tripled the cultural outlays of his predecessor. He also mentioned his proposal for additional economic stimulus aimed at book production. Santos thanked Correa for bringing works of Ecuadorian literature to his attention and promised to read his counterpart’s Ecuador: de Banana Republic a no República, officially released at the Fair. While Santos did not ignore Correa’s overtures to seek commonalities, the nub of his message was “lectura=libertad,” stressing the importance of education as a tide that raises all boats.

OK, but no one thought much of the ping pong matches at the time.
Posted by David Block at 3:32 PM