Beyond a Social Network: Using Facebook with an Advanced Spanish Class.

I joined Facebook sometime in early 2008 and by July I had become more than just a novice user and saw its potential beyond “friending” those I already knew and accepting the “friendships” of those with whom I was having my first amicable meeting through their request to join their network of friends.

In experimenting with the site, I started by creating an open group (LASA Sexualitiea Section) for the Sexualities Studies Section of the Latin American Studies Association (LASA), a group for which I have been maintaining an online Bibliography for several years. The ability to upload images of book covers (and include reviews, interviews, etc) seemed a more visually appealing mode of sharing bibliographic information than the Yahoo list the group had created several years earlier to communicate with members. A brief note on this appeared in the February 2009 issue of the SALALM Newsletter.

In December of 2008 it was time to start planning for a class in the Spanish Department (Introduction to Literary and Scholarly Research) which had been redesigned and included a library component to expose students to “fuentes primarias” as part of their advanced research. This new incarnation had been taught once already during the Winter Quarter of 2007, a few months earlier. I proposed using Facebook as a way of integrating new technologies to introduce users to original/unique/special library resources.

After all, we already knew that approximately 80% of college students were avid participants in this popular social network. The materials to be consulted were non-circulating, thus having digital images of many of those resources would facilitate use of those items as they would reside in a site that would make them available 24x7, one of the expectations of the millennial library user. It seemed like a very logical way of exposing a new net generation to a range of….what word should we use? Older, Rare, Antiquarian….resources?

I immersed myself on maneuvering through the site and began to create Events for each of the sessions for which the class was to visit the Library to consult materials in our Special Collections Reading Room. The items to be used ranged from facsimile editions of Medieval texts and Pre-columbian codices to literary correspondence in its original as well alternative publications like the Cartonera and Leñateros hand-made books or the controversial Memin Pinguin comics.

The process of mounting images for each class event appeared to be effortless. Simply “googleing” a topic/name like Sor Juana, and SAVE IMAGE AS via the right click of the mouse and the imaged was saved to my desktop. But it turned out to be a more complex task as the images did not load in chronological order but rather as last in/first out. REMEMBER THIS! After that “small” glitch was caught, I entertained myself during a 2 week vacation (mostly rainy days) reloading the images to fit the desired chronology and through the Edit this Photo Facebook function, I was able to add/modify text (Copy & Paste is wonderful, right?) to accompany each image of the materials to be shown in class.

On the first day of class, I went to the meeting room, held outside the library, to provide a brief overview of the library component of the course: a basic demonstration of how to search the online catalog to find items housed in Special Collections. What I hoped would be a simple “repaso” of basic OPAC searching proved to be a novelty for the students. There was something else other than Google to find library resources!

The first task was to have the students join the closed group that had been created within Facebook for their class: Span Lit 120 (see images below). They had the option of searching for the group and ask for permission to join, the group’s administrator(s) can be the gatekeeper(s). I discovered that if had their email addresses and they were not part of my network of friends, I could not invite them to join, or at least that appeared to be one of the initial logistical “pegas.” A simple step became a bit cumbersome as sometimes students had to “friend” me so that I could give them access. Not all of them followed these steps right after class, some waited until a week later, the day of the next meeting! Net user comportment does not seem to deviate much from that of those of us born before 1980, the so called “Digital Immigrants.”

How did students navigate through the site?
It became clear that for them Facebook was a social network to keep track of the whereabouts of their friends through fragmented status updates: “research paper…done” all in a brevity that would make a Twitter posting resemble an unending Joycean sentence.

One of the students was already on Facebook but assumed another “identity” just for the class, reiterating what others have noted: they use it only for social networking and connect with those with similar interests. This may change as others start to explore how to integrate Facebook as teaching tool in the college classroom.

Indeed, of the 15 registered students, few realized the extent to which the site contained multiple images (of some texts that were shown in Special Collections) with notes supplementing my class presentation. Others did not realize that the “invitation” to attend an event (a class visit to the Library) meant there was further need to consult the site for materials related to the class visit.

The “Wall” was used to communicate with the group either to give exact bibliographic citations of the materials shown in class, to suggest further reading or alert some one of an article/book/site of interest related to their final class project or simple to clarify one of those questions I had not answerer…but I had promised to check and report back. For lengthier postings the Discussion Board was more appropriate given the “Wall’s” limit of 1000 characters.


What could have been done differently?
The class will be taught again during the Fall Quarter (2009)and one of the basic changes would be to have it be less unidirectional (I mount the images and text) and be more user-centered (students coud be asked to comment on the images of the materials shown in class).

To ensure that students are conversant in searching the online catalog to retrieve non-circulating materials housed in Special Collections, having them do the actual paging of items would become a more engaging experience. Sometimes this process can be done online and at others a form needs to be completed in writing, that old fashioned modus operandi, so 20th century.

The class will have the added advantage of meeting twice of week. This should provide a more cohesive manner of presenting materials and not having to wait 7 days to meet in person. The online activities (students posting comments on the materials examined in class) can also provide more continuity that was lacking in the previous class settings.

Facebook and Academic Performance: Reconciling a Media Sensation with Data (2009)


A Response to Reconciling a Media Sensation with Data (2009)


TechMatters: Going Where the College Students Are: Facebook and the Library (2007) 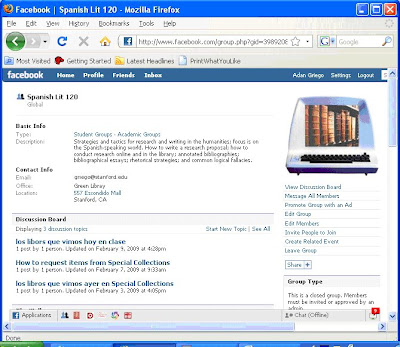 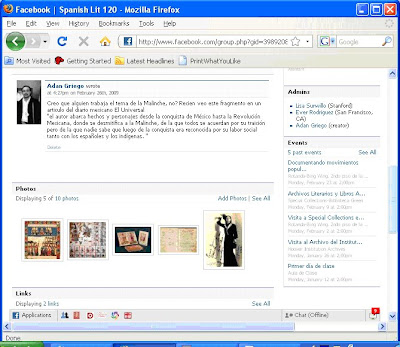 Greetings to the blog reading SALALMeros out there.

The final program for SALALM 54 is now available on the conference website. It's hard to believe the rough notes and lists I sketched out with Peter and Ricarda over cold lemonade in New Orleans has turned into this 32 page document. Now I need to clone myself so I can sit in on all the panels.

Hope to see some of you soon; others can look forward to our ongoing posts and eventual conference reports.

saludos,
pamela
Posted by Pamela Graham at 4:09 PM No comments:

Email ThisBlogThis!Share to TwitterShare to FacebookShare to Pinterest
Labels: conference

Hi all,
This is my first entry into the salalm blogosphere-- and how appropriate that I am writing about SALALM's digital future! I have posted a note to LALA-L describing my idea to form an ad hoc group within SALALM to explore ways to make our organization more electronic. Hopefully saving us some work and time and paper. I am pasting in the proposal below.

I invite you to send your feedback, either directly to my Columbia email (graham@columbia.edu) OR you can use the comments feature of this blog to share your thoughts. We will dedicate some time to this issue in the Town Hall meeting at the end of the SALALM conference, on the afternoon of July 8th. If you post or send a comment, I can bring that to the discussion, if you wish. I'll look forward to receiving your thoughts, in person or in bytes. Thanks! Pamela

This proposal seeks to set up an Ad hoc committee (to be called the e-SALALM Group) to investigate, research, and recommend measures that could be taken to improve and increase efficiency in several SALALM functions via the use of technology. Over the course of the last few years, the membership and SALALM officers have expressed an interest in moving several key functions online and this theme surfaced in the 2007 PRI Survey. Shifting some of SALALM’s functions online will involve initial and ongoing costs, and will require an examination of available software and tools, and a consideration of several non-technological issues. I propose setting up a working group that can survey and review such options and issues with the goal of providing the Executive Board, the Finance Committee, and other relevant Committees with specific recommendations for pursuing any appropriate changes.

Possible categories of functions and activities to be reviewed: 

Possible tasks for the e-SALALM can include the following: 
Membership: The group will consist of a Chair and approximately 5 members. The group should include a mixture of persons with technological skills and experience, and those with strong familiarity with SALALM’s committees and functions. The committee will be populated by a combination of appointments and an open call for volunteers from the membership to serve.

Timeline for work: The group will carry out most of its work during the 2009-10 academic year. A brief status report should be sent to the Executive Board in January 2010. The group will deliver a report and recommendations to the Executive Board and Finance Committee two weeks before the SALALM LV conference so that these recommendations can be considered at the annual Executive Board and Finance Committee meetings. More complicated issues may require additional time for research and investigation so some of the e-SALALM group may carry over into the following year.
Posted by Pamela Graham at 4:27 PM 3 comments:

You are probably already familiar with the restaurant (and almost everything else) review site - Yelp (http://www.yelp.com/). It's my go-to site for dining decisions. Sadly, it appears that there is no Yelp Berlin, yet. However, you can find great restaurant reviews for Berlin on a number of sites:
Happy eating!
Posted by Martha Kelehan at 9:39 AM No comments:

Check out this sneak peek of the draft conference program for SALALM 2009 in Berlin. There are so many great-sounding panels!

We are still looking for a few more volunteer rapporteurs. If you're able to assist, contact Roberto Delgadillo, UC Davis, for more information.
Posted by Martha Kelehan at 10:12 AM No comments: