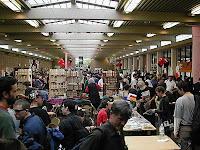 I had almost forgotten about it until a friend asked if I had plans to go to the Anarchist Book Fair. I replied, half jokingly, that the last I time I had been to one, it was an unusually warm day and the not so pleasant smell of body odor, combined with all the blooming trees and flowers at San Francisco’s Golden Gate Park, was just a bit too much for my allergies. I remember asking a true “lefty” friend if the annals of anarchy (I don’t think principles, or rules would be appropriate) commented on questionable hygiene as true anarchy. She gave me a “give me a F…ing break!” kind of look.

I decided going early (before the un-air conditioned warehouse by the park would hit above 70 degrees) would pre-empt worries about odors of any kind. So I called a Middle Eastern friend who boasts of his rugged adventures in India and claims he is always ready and willing to try new things in America.

I no longer have that 20-something “aventurero” spirit, the same one of my junior year abraod when I embarked for Spain with barely enough money to last only a few months. I spent a year there, the best of my limited West Texas existence!

The anarchist tide was in our favor, parking only a block away. We could already see a few [mostly white] young people sporting the attire de rigeur: overly worn black outfits, multicolored hair styles coupled with body piercings and tatooes. I was starting to feel that my dark green pants and blue shirt were not quite the uniform to fit in, especially the jacket….but more on that later.

At one of the first tables I found posters supporting the Zapatista and Nicaraguan revolutions. A few tables down there were others in support of immigrant rights, the Mothers of the Plaza de Mayo, the United Farm Workers.... I was starting to feel at home. Then I recognized some of the posters from an earlier show at San Francisco’s Galeria de la Raza: Dignidad Rebelde: Art in Action.

Some of the more established publishers like AK Press seem to have an extensive presence of Latin American titles. The stand of PM Press had a glossy catalog (80 pages) with titles from a collective of publishers with revealing names like: Big Noise Tactical Media, Found in Translation, Switchblade, Spectacular Fiction, Reach & Teach, Trade Root and the Green Arcade.

One of the titles will be familiar to those of us at the 2009 Guadalajara Book Fair, Diario de Oaxaca. It's a sketchbook journal by American graphic artist Peter Kuper's two years spent in Oaxaca at the same time that teachers's strike led to a seven month siege in 2006-2007. 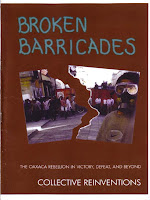 Those same tragic events in what up to then had been a picturesque and bucolic Oaxaca were also the subject of a 19 page pamphlet (Broke Barricades: the Oaxaca Rebellion in Victorry, Defeat and Beyond) published in Palo Alto by the group Collective Reinventions. Who said there was no anarquist activity in the same town that's home to the Hoover Institution?

By chance, I happened to have the office’s Pcard, but I doubted any anarchist vendor would even consider it. Sure enough, I noticed a sign indicating “we accept checks and credit cards.!” I mentioned this to two other librarians I encountered there and we were all a bit surprised. I guess there is some truth to that old saying "if you cannot beat the enemy, join them."

In the past I have seen pamphlets by the Flores Magon brothers, considered to be intellectual precursors of the Mexican Revolution. A copy of their publication Regeneración in its original format is hard to find these days. That's probably more for the antiquarian book fair that comes to town in February of 2011. Those of you in New York can check at next month's fair and tell us what other treasures (anarquist or antiquarian) you found.

I stayed longer than expected and more than once lost sight of my Middle Eastern friend. He loved the whole experience, even argued with a young exponent of anarchist thought who finally admitted to him, “I am just here for the day….”

I must have been one of the few people with an outfit not really made for an early Spring anarchist gathering. A faux leather jacket does not quite cut it....but I had a great time....and happy to report no allergic reactions.
Posted by Adan Griego at 6:55 PM