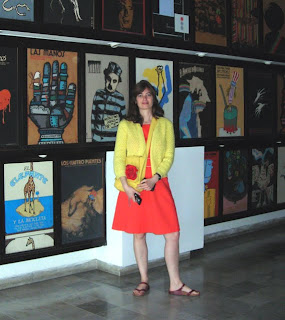 Getting the license and authorization letter to travel to Cuba through Brown University was a smooth process. The Center for Latin American and Caribbean Studies at Brown offers a study abroad program at Casa de las Americas in La Habana and a number of students and faculty members have already set the path for Cuban travel. I received Title VI funding for the trip and was advised to request my visa and plane ticket through Common Ground Education and Travel. My port of departure from the United States was Miami where I boarded a 50 minute charter flight to La Habana.

Prior to leaving for Cuba I had made arrangements to stay at a casa particular in El Vedado. This private bed and breakfast was run by Caridad Vera and her husband Elio Rodriguez Peréz. I was so happy with their services and friendship that I created a free Webpage through Yola for them: http://casavera.yolasite.com.

I arrived in La Habana on Monday February 15th in the afternoon. Changing my Euros to Cuban Convertible Pesos (CUC) at the José Martí International Airport was rather easy; however I failed to also acquire a few pesos in moneda nacional which travelers need for riding the municipal bus system and purchasing a few token items. It’s recommended that you do not change US dollars to CUCs. Not only is the US dollar worth less than the CUC but there is an additional 10% bank charge for the US currency.

The next day, I was able to visit the Feria International del Libro thanks to the kindness of a stranger. Not having any moneda nacional on me as I was boarding the special bus to the Fortaleza of San Carlos de la Cabaña, I had to ask the lady standing behind me for change. She quickly offered to pay for my bus ticket and for the entrance to the fair grounds. All I had to do is keep my mouth shut since foreigners have to pay a special price. I would have gladly paid the price for extranjeros but at the time following her advice seemed like the fastest way to get to my destination. Once we got through the doors my new companion paid to have our bags put away in a locker (you cannot enter the exhibits halls with handbags) and showed me around the various rooms where the publisher and bookdealer stands were located. Unfortunately, I soon realized that most books were sold in moneda nacional and I didn’t have the heart to ask my friend for change and, through her boundless generosity, have her pay for Brown’s burgeoning Cuban book collection. I just looked around with the intention of returning the following day.

I didn’t find any materials at the fair that I couldn’t purchase through my regular bookdealer. When you purchase books in Cuba you must keep in mind that you will need special permission to take out of the country books, journals and maps published before a certain date. The Biblioteca Nacional and the Instituto del Libro will assess the materials and process the paperwork for you.

On Wednesday I visited the Instituto Cubano de Arte e Industria Cinematográficos (ICAIC) with Martha Mantilla. I knew a few people from the ICAIC thanks to a Cuban panel and film series that was organized last year by the Providence Latin American Film Festival (PLAFF), an annual event co-sponsored by Brown University. Unfortunately we missed the Festival de jovenes realizadores cubanos that was due to start the following week.

That afternoon I walked along the Malecón to Casa de las Americas to visit its library and bookstore. The staff was friendly and very helpful. The gentleman managing the bookstore even created a list of Cuban films I should purchase for Brown’s collection.

On Thursday, I visited the Biblioteca Nacional and La Habana Vieja were one may find small bookshops and street book vendors. In the afternoon I strolled down to the famous Heladeria Coppelia where locals and tourists alike may purchase tasty ice cream for a few pesos. Given the limited sitting space and the large crowds people are forced to share tables, a civil way to make new friends in a foreign land. I sat with a young couple attending university. They spoke about the reality of the job market for young Cubans, salaries and the varying levels of job satisfaction. Having spoken about the world financial crisis they paid for my almond ice cream. I was rather mortified, especially since I now had many pesos in moneda nacional in my pocket, but they would not have it any other way. We later exchanged e-mails.

Friday was my last full day in Cuba and I decided to visit film director and theoretician Fernando Birri (Santa Fe, Argentina, 1925) at the Escuela de Cine y Televisión de Tres Mundos (EICTV) in San Antonio de los Baños, near La Habana. Don Fernando, who donated his personal archive to Brown University two years ago, co-founded the EICTV with Colombian novelist and Nobel Prize recipient Gabriel García Márquez in 1986. Since its foundation, Birri travels to Cuba every year and stays at the school for about a month to see its progress and talk to faculty members and students. The EICTV not only offers an impressive program in film and television but is self-sustainable through agriculture.

I left Cuba on Saturday afternoon. My book fair companion made sure to meet me at the airport to say goodbye. Not once did she accept repayment for all the pesos I owed her and only reluctantly accepted my gifts of Argentinean chocolates and Panamanian cookies.

Traveling to Cuba was a unique and culturally enriching experience.
Posted by Patricia Figueroa at 6:41 PM