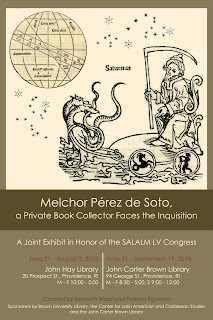 A joint exhibition in honor of the SALALM LV Congress. Melchor Pérez de Soto, a Mexican astrologer and architect, built one of the most impressive private collections of printed books in 17th Century Mexico. According to an inventory of its library made by clerks of the Inquisition, the collection contained 1,592 volumes, covered various disciplines, and represented authors from the classical to contemporary periods. During the last five years of his life, the Holy Office gathered evidence on perceived heretical activities carried out by Pérez de Soto which included practicing astrology and owning prohibited books. He was arrested by the officers of the Inquisition on January 13, 1655, and spent several weeks in solitary confinement. He was found dead in his prison cell on March 17 of the same year. This exhibit illustrates the depth and breadth of the Pérez de Soto private collection and provides a glimpse into one of the finest minds among humanists in colonial Mexico.

This exhibit brings together innovative anthropological ideas and evocative artifacts from the Amazon to the Arctic to plumb the cultural diversity of the Americas before European contact and explore the forgotten histories of its indigenous people. Building on recent discoveries and methods developed by archaeologists and anthropologists over the past decades, Reimagining the Americas uses cutting-edge perspectives to illustrate intriguing, often complex, histories through artifacts of ceramic and stone, jade and gold, bone and textiles that illuminate the past and expose themes that resonate with present and future concerns. From the arrival of humans in the Americas to the rediscovery of ancient Amazonian cultures and the deciphering of lost histories written by the Maya and Aztec, Reimagining the Americas challenges us to rethink the past and to recognize 13,000 years of indigenous achievements before Europe looked to the west.
Posted by Patricia Figueroa at 6:35 PM