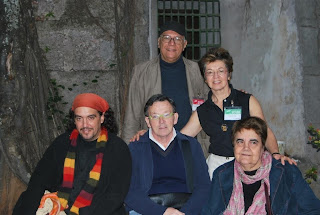 I traveled to Cuba using Pitt’s Center for Latin American Studies license and Title VI funding for book acquisition trips. The administrators from CLAS advised me to request my visa, plane ticket and hotel accommodations through MARAZUL, a travel agency located in NY.

I got my initial taste of Cuba at JFK airport in New York. From the time I joined the other passengers of this charter flight, I felt like part of a very large Cuban family traveling together. Most of them were Cubans living in the US.

Before boarding the airplane, we spent four hours making three different lines: one to get our boarding passes, another to check- in our baggage and one more to pay the airport fees. While we stand in line, people were spontaneously sharing their reasons for their travel, telling stories about live in Cuba and giving tips on what to do to avoid extra charges at the José Martí international airport in Habana. I learned that in addition to paying at the JFK airport for the luggage, we would also have to pay at the José Martí airport. The general view of the Cuban travelers was that their Cuban compatriots would try to overcharge them for their luggage. Thus, they were a little bit concerned about that. Traveling with a lot of stuff was almost the norm for most passengers since they were bringing food, medicines, and other things to their families and friends.

I engaged in a very lively conversation with the people standing besides me on the lines. I asked one of them the reason for his travel and the length of his stay in Cuba. He said that his trip was going to be short: he was going to Havana to shave Castro’s beard and come back. I started laughing! I later learned that this compatriota from Medellín, Colombia, was actually not traveling to Cuba. He was helping a Cuban passenger carrying all his stuff: suitcases, boxes, and more. My time at the airport was spent between reading “La sombra del viento” de Carlos Ruiz Zafón and listening to the most fascinating and lively conversations.

I was lucky from the start. The man next to my seat in the airplane was the eighty-year old Cuban who had spent most of the morning at the airport singing coplas that he would compose on the spot. His nice told me that it was very common for him to make coplas related to the situation he was experiencing at that particular moment and sing them. This sweet viejito coplero kept singing from time to time with joy and humor. We arrived in Havana as scheduled. I went through immigration and customs without trouble and did not have to pay any luggage fees for my tiny suitcase. The representative from MARAZUL helped me to change money and put me on a taxi on my way to hotel Vedado. I felt the wonderful breeze of the sea, saw again the lights of the Malecón and wonderful memories came back. I had been in Cuba in four previous occasions, the last one in 2000. I noticed changes on the streets. I saw Pullman buses used tourists and public transportation as well as modern cars of recent models and different makers. I did not recall seeing those on my previous trips. The bicycles and well-known old Cuban automobiles were also populating the Havana streets.

The next day I went to the Hotel Nacional, two blocks from the Vedado, to change money to CUCs. I started a conversation with a Cuban who kindly took me to a Casa de Cambios to get moneda nacional, which I needed it for buying books at the Book Fair. Many books at the fair and on the street are sold in moneda nacional. My next step was to get to the Fortaleza San Carlos de la Cabaña the fortress where the Book Fair took place. Located on the east side of the Havana Bay, this is an impressive fortress with XVIIIth Century walls. Every night at 9 p.m., soldiers dressed in suits of the epoch shoot “el cañonazo de las nueve”, (the gunshot of the nine). I took a taxi to get there. I had learned about taxis, mostly used by foreigners, which are easily recognizable and clearly marked. The jitney-like cars (colectivos), on the other hand, are basically for the Cubans. Taxis are to be paid in CUCs, thus significantly more expensive than the jitney-like cars, which are paid in moneda nacional. Some Cubans I met, being somewhat concern about me paying for taxis, wanted me to ride with them in the jitney-like cars. Indeed, I rode a jitney-like car once with a Cuban guy that I met at the Book Fair. He asked me to keep my mouth shut while riding the car because he did not want the driver to know that I was not a native. As a foreigner, I was not supposed to ride the jitney-like cars. He later offered to get for me a “cuban outfit” so that I would blend in more easily, to which I politely declined.

One of the highlights of my trip was a memorable tour that Joaquín Borges Triana gave me of Havana Vieja. We had met by e-mail when he contacted me in 2009 about his newly published book “Concierto cubano/Cuban Concert”. In our exchange of e-mails, we agreed on having coffee together if I ever traveled to Cuba. We met at the Café Escorial, a very cozy place in a beautifully renovated building with a tradition in coffee business located in la Plaza Vieja. While we walked through the narrow streets of Old Havana, Joaquín gave me a little bit of history of some of the buildings: Hotel Plaza, Gran Teatro de la Habana, the Cathedral. We stopped at the Biblioteca Publica Provincial and met Joaquín’s friend Gretell Lobelle, the Director of the library, who gave us a tour. I was very impressed with the facilities and the services of this public library as well as the José Martí Public Library, which I also visited.

At the Book Fair, I attended the presentation of Joaquin’s latest book, “La luz, bróder, la luz: Canción Cubana Contemporánea”. He introduced me to some of his friends including Victor Casaus, Director of the Centro Cultural Pablo de la Torriente Brau. This Center seeks to rescue and maintain alive the collective memory of the Cuban nation through a program called MEMORIA devoted to the research and promotion of Cuban oral history. The Centro Pablo held a number of activities commemorating the birth centennial of Miguel Hernández, including presentations of a new generation of Cuban TROVADORES in the fair’s Programa Artistico Cultural held throughout the city. I also met Fidel Díaz Castro at the Book Fair who is the Director of the Caimán Barbudo. He kindly gave me several publications including issues of Caimán Barbudo to fill gaps of the Pitt’s Latin American Collection.

I visited the Instituto Cubano del Arte e Industria inematografica (ICAIC) together with Patricia Figueroa and we met with Lic. Rosa María Rovira García, Directora de Relaciones Internacionales. We talked about the Cuban Film Series that Pitt is planning for the Fall and the experience in Brown with a similar program. I also visited the Instituo Cubano de Investigación Cultural Juan Marinello and made exchange agreements. I bought some of the library materials although many of them were given to me as gifts for Pitt’s LA collection. The generosity of the Cuban people never cease to amaze me. On this trip I was reminded, once more, of the generosity that was afforded to me during a conference in Education that I attended in the mid 90s during the Período Especial. Eventhough the mid 90s were a period of economic hardship, I was tremendously moved by a teacher who gave me a gift of a T-Shirt, which I had complemented it the day before when I saw her wearing it. Once again, on this recent trip, I was surprised when a book vendor took his scarf off and gave it to me after I had completed it. The gratitude one feels, for their generosity, is hard to express in words.

My Book Fair trip to this beautiful island in the Caribbean was unforgettable. I made time to walk in the Malecón, the avenue that runs along the seawall at the northern shore of Havana, had a meal with a Cuban family, attended a concert of the Cuban Van Van and another concert of Polito Ibáñez in the teatro Mella. I met wonderful people along the way. Our exchange of e-mails is already working well. The packages with the books, journals, CDs and other materials that I acquired in Cuban are arriving safely to Pittsburgh. My fear that the materials would be lost in the mail is gone. I am already starting to dream about my next trip to Cuba.
Posted by Patricia Figueroa at 1:32 PM