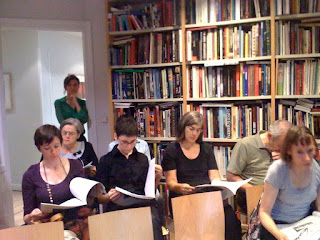 At the Revista del Libro breakfast.
I went to Madrid with the express purpose of building both the Catalan and the DVD collection for CU, Boulder; and yes, the irony of looking for Catalan books in the one year that Liber was held in Madrid wasn’t lost on me… The book fair held its usual surprises, however, and I came away armed to the teeth with catalogues and ideas that stretched far beyond my initial goals. For Catalunya, I visited both the Gremi d’editores de Catalunya and the Comunitat Valenciana, among others. At the Gremi I spoke with a vendor who seemed very surprised to see me; he spent a considerable amount of time showing me his extensive website and in particular some beautiful medieval Catalan texts. After the book fair, I visited both the Centro Cultural Blanquerna and the new Madrid branch of La Central. La Blanquerna “tiene por objetivo la difusión de la cultural catalana en Madrid”, part of which is a fabulous bookshop. Unfortunately they don’t currently have an online catalog but they are working on it. La Central, housed in the Reina Sofia art gallery, has three well set out floors, though it also caters to the Madrileño and the art crowd as well as the Catalans. Staff were infinitely more pleasant than the rather antipático crew at la Casa del Libro though…

DVDs were hard to find, as ever, though I managed to raid El Corte Inglés and FNAC before Mark Grover got there (sorry, Mark!) I also risked life and limb along the Gran Vía to reach Ocho y Medio, a shop that is dedicated to books on cinema. I arrived at 4pm, yet, in true Spanish style had to hang around for an hour till they opened; it was worth the wait though to talk to the extremely knowledgeable staff. I headed back via the Librería Juan Rulfo bookshop in Moncloa, who had a good Spanish film exhibition. Lists of titles are being made, and it was great to talk to them; they even gave me a free book for trekking out there in the very warm fall weather!

The book fair was very e-book focused this year; the Publidisa stand caused traffic flow problems every time they gave a presentation, and the ebook panels were standing room only. Ebooks in Spain still seem to be slightly behind US production (The European Kindle was released while we were at Liber) but every publisher that I spoke with at Liber seemed to be very interested in e-book production. So I think it’s a case of: Watch this space!