Choosing your own time….at the 2010 Buenos Aires Book Fair

Sunday, April 19th. Not too much traffic on Avenida del Libertador yet. It is, after all, barely past noon on a Sunday. “Lindo dia,” I say to the taxi driver, “es un domingo peronista,” he replies. When I ask why, he proceeds to tell me how politicians used to gather after a typical Sunday “asado” and some good Argentine wine, to plot “como joder al pais…” then adds, “como los de ahora…" Who would have thought that simple weather question would uncover such deep political sentiments, which appear to have been building up for some time now.

Soon we arrived at my destination, the Recoleta section of Buenos Aires, probably best known for the cemetery where Evita’s tomb is located and home to a home of trendy shops, restaurants, and museums. A few Salamistas are in town already for the annual book fair and I have just run into Alfonso Vijil, later that afternoon we will run into the Karnos at the Museo de Arte Hispanoamericano Isaac Fernandez Blanco

I will have my yearly dose of “asado” before visiting the Museo Nacional de Bellas Artes for an exhibit on Martin Fierro, the 1920’s avant garde publication. Wondering through the exhibit, I cannot help to think about a forthcoming event in California where Stanford and Berkeley will host a joint exhibit in September 2010 to celebrate Mexico’s Independence Bicentennial and the 100th Anniversary of the Revolution. My ongoing dreams about Pancho Villa, Emilino Zapata, and independence heroes Vicente Guerrero and Xavier Mina are a constant reminder that the due date approaches. At least mine are “heroic dreams,” not nightmares.

Monday, April 20th. This morning Phil MacLeod (Emory University) and I will follow a “recorrido libresco” up Avenida Corrientes home to many a bookstore. A pre-book fair outing that will supplement what awaits us the next day. It’s more manageable to visit “librerías” that carry the kind of materials of interest to an academic audience like ours.

Asunto Impreso’s Librería de la Imagen appears to be closer to our hotel than in previous years, perhaps is the pleasant weather that makes the recorrido seem less cumbersome. Along the way we stop by the place where last year I found the movie outlet Blackman, familiar to us all for it’s wide selection of Argentine films. But the office is closed (it’s past 11:30am and there is no indication of when it will open).

When we arrive the art bookstore, Alfonso Vijil is just leaving and points to the new women’s bookstore next door. It’s the one familiar to SALALM members from its previous location on same street where the Mothers of the Plaza de Mayo also have their coffee/book shop.

I alert Phil that books will all be wrapped in plastic and we'll have to ask the staff to unwrap them. Surprisingly, not all of them are and we are able to browse at the “novedades” shelf with much ease. Perhaps the publisher headed my plea a few months ago at the Bogotá book fair when I complained, actually, suggested that at least an “ejemplar de muestra” be available.

I jotted down several titles, and purchased one for the library the bilingual book *Arte naïf : libros de notas : una visión poética de la vida : 34 artistas Argentinos (OCLC: 47841717), although this is a special edition in a case and with some original prints.

For my own collection I purchase: *Body Politics. Políticas del cuerpo en la fotografía latino-americana (OCLC: 495778935); and *Desnudos sudamericanos (OCLC: 516281697), which appears to be available also as a photo portfolio, but that’s beyond my budget. A set of the photos has been on exhibit in Los Angeles until just a few days ago. 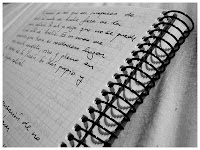 We now move next door to the women’s bookshop, where I take down many more titles, which I will have to reconstruct from memory since I lost my ubiquitous notebook on the last day of the fair!

On the way back to the hotel, I recognize the restaurant where last year Teresa Chapa (UNC-Chapel Hill) and I had our very own “comida casera,” It’s just before the lunch rush hour and we go in for an early meal so that we can make it on time for the matinee showing of this years Oscar winner for best foreign film, EL Secreto de tus ojos, which just a few days ago has opened in selected cities in the United States.

For dinner I will meet a friend from my UC-Santa Barbara days. He lives in the northern section of Belgrano and does not teach on Mondays and has agreed to meet me for an early dinner, early for him, but way too late for me at 8:30pm.

Tuesday, April 21st. Today will be the second part of our “paseo imperdible” up Avenida Corrientes, this time all the way to the Callao intersection….looking for…..books, what else. The vibrant publishing industry of Buenos Aires has been recognized by the Ministerio de Desarrollo Económico not only as a worthy enterprise but also one of commercial value celebrated with a “Noche de Librerías”.

Our first stop will be Antigona, which has expanded into the Centro Cultural de la Cooperación that houses a series of performance spaces and a coffee shop. We spend most of the morning there, probably annoying other customers with our constant “have you seen this book? And this other one?” But, Phil will have to fill in the blanks…. my notes are gone in that notebook I lost on my last day at the book fair.

After lunch, I take a well deserved rest and catch up reading the dailies I have accumulated during the past 48 hours: La Nación, The Buenos Aires Herald and the Argentine edition of Spain’s El País. There is already some press coverage of the book fair that opens the next day, one day shorter for the “días de profesionales,” but still 3 weeks for the general public.

Wednesday, April 22nd. Our visit to the fair grounds at La Rural will start with an early bus ride at 8:30am. The group of 7 Reforma and SALALM librarians and a few other US distributors is being generously supported by Fundacion ExportAr. After a brief meeting/reception with book fair dignitaries, some of us will hit the aisles, while others will meet publishers. Our task for the next 2 days will be, “comprar, mucho, pero mucho” as we have been instructed by our hosts,

During one of the first meetings with publishers when I explained that we work with distributors, he gave me a copy of booklet on the Editores del Plata, which brings together several independent publishers in an attempt to compete with both large publishers and distributors.

Thursday, April 23rd. Today will be a continuation of the previous day, meeting with publishers, visiting stands, check the OPAC.... While visiting the almost hidden section that housed the combined regional Argentine research centers I saw fellow SALALMista Peter Alterkrüger from Berlin's Ibero-Amerikanisches Institut. He did not see me until the following day when I was madly in search of my lost notebook. 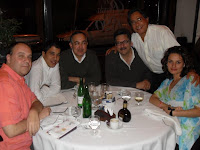 To end the evening it will be dinner with one of SALALAM’s vendors in Uruguay (Luis and Carlos Retta). They seem to have convinced Colombian vendor Angela Silva Castillo (Siglo del Hombre) to attend the upcoming Brown conference this July. She already who knows several SALALMistas from the Bogota and Guadalajara book fairs.

Friday, April 23th. Last day, which we know share with the general public. I am seated by the Clarín stand, which competes with La Nación, not only for daily readers but also for space at the fair main entrance. I am joined at my table by a pair of older ladies with whom I share my copy of La Nacion’s literary supplement, adn Cultura “lo importante es leer, no importa que sea de la competencia,” says one of them. 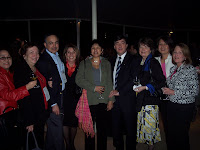 When I ask what time it is, the other one shows me her watch and says, “elije vos a tu gusto,” the same response she got from a youngster when she asked the same question. It’s almost 6pm and the closing reception for "Profesionales" is about to start, so I bid my farewell to them as they join the thousands of "porteños" who have come to "curiosear," through all the many aisles overflowing with books.

Saturday, April 24th. One last minute visit will be to a DVD store that sells a variety of Argentine films. We thought they opened at 10am and arrived promptly at 10:05. When the sales clerk arrived at 10:15 and saw 2 SALAMistas and 1 Reformista, I thought he would close the door and wait until 10:30. But he welcomed us inside the small locale. Little did he know that we would drive him crazy: me asking for the same movies that Phil had bought a few days earlier and Alfonso Vijil saying he also wanted a set…plus a few more he needed.

If my Buenos Aires trip started with a visit to a museum, it was very fitting that it should end with a similar visit, to the MALBA’s show on art of the Cuban avant garde. I had no more room in my carry on luggage, so I exercised restraint while visiting the museum bookshop. Besides, I was already late for the hotel check out and would be heading for the airport soon.

As I mentioned earlier, I lost my notebook with multiple book titles and diary entries, but here are some titles of interest. For public and academic libraries:

*Editorial el Maizal has a series of books on various aspects of Argentine life: tango, wines, gauchos as well two others on native Mapuche culture

*From La Marca Editores the Registro Gráfico series includes some bilingual titles that supplement those from Maizal above.

*Editorial Heliasta has several dictionaries on law and business, some bilingual (see the diccionarios section at their site) 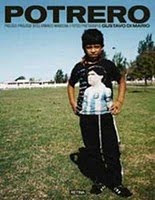 A series of detective fiction titles seemed to be of potential interest to our literary clientele, especially 1-2 graphic novels. A virtual browsing through their recent published titles is possible, giving it "hip" sense of it all, right?

You can also see read some of the "prensa" generated by this new/independent publisher.